But the truth is that honey is widely considered to be a kosher food, assuming it doesn’t include any additives or process aids. 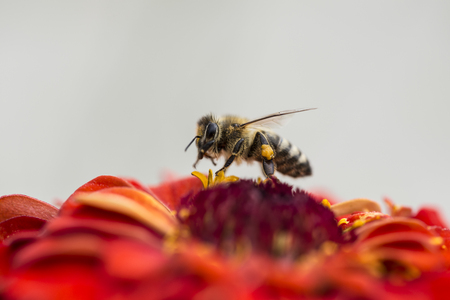 Why is this? Well, the explanation is actually pretty simple, and it has everything to do with the way bees produce honey. In order to make it, honey bees spend a lot of their time sucking down nectar they find in flower blossoms. They swallow the nectar they find and store it in their honey sacs where it mixes with enzymes that turn the complex sugars in nectar into simple sugars.

The nectar goes through a process called inversion while inside of the honey bees.

From there, bees make their way back to their hives where they empty the nectar in their sacs so that bees located in the hives can take it, suck it up, and fashion trace nutrients  in the nectar even further for the health of soon to be adult bees. Once that process is finished, those bees regurgitate the nectar again and store it in the honeycomb cells located in their hives. They also fan the nectar with their wings so that any water located in it evaporates, which leaves behind ripened honey which is finally covered with beeswax.

This is a very intricate and unique process, and it makes honey kosher because, as you can see, the nectar never actually goes entirely through the bees. Instead, the bees basically act as carriers of the nectar that turns into honey later, which makes it kosher in the end. If the bees actually produced honey like a non-kosher camel produces non-kosher milk, honey wouldn’t be considered kosher.

But nectar is never digested fully by bees and it’s not secreted by bees either, so it makes honey a kosher product.

Even with all of this being said, there are some instances in which honey is not kosher. For example, if a company adds flavoring to honey, it’s no longer kosher. But overall, honey is considered kosher and is an acceptable form of food for those who follow a strict kosher diet.

Would you like to get your hands on OU certified Kosher honey for your Kosher food formulations? Honey Solutions specializes in providing America’s food processors with OU Kosher, GFSI-BRC AA Certified, quality honey. Call us at 281-576-1700 today to inquire about placing an order.